The term “hail Mary” used to be used exclusively for religious purposes.  Then football co-opted the phrase to describe that last ditch effort a team makes when the Quarterback heaves the ball as far as he can down the field in the hopes that one of his receivers will be able to wrestle or nab the ball and fall into the end zone for 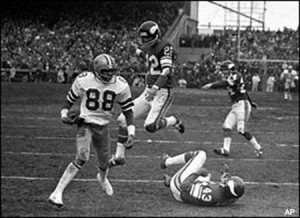 a game winning touchdown.  As a young boy, I remember all too well the suddenness of what a successful “hail mary” pass feels like, at least for the losing end.  I will never forget Dallas’ Drew Pearson pushing off Minnesota’s Nate Wright so that he could haul in Roger Staubach’s Hail Mary throw to defeat the Vikings in the NFC championship game in the mid 70’s.  Painful still today ;).

So, what’s all that have to do with Social Media?  As I talk about social media with clients, potential clients, friends and others (seems that it always comes up when you do this for a living :)), I get the sense that what they really want from Social Media is to throw the Social Media Hail Mary and hope it works.  But, I’m constantly reminding them that Social Media is not a last ditch effort to save the game for them.  You don’t go from not having much or any presence within the key social networking channels (Facebook, Twitter, LinkedIn, Google +, Blogs, Video, webinars, etc) to becoming effective and successful in utilizing Social Media as part of your overarching Marketing strategy.  Social Media is not a replacement for sound strategy that points you and your organization toward the accomplishment of your mission.  It is a tremendous tool that every organization needs to begin building into their marketing and operational plans.  Yes, operational.  Social engagement is not a consultant coming in, hearing your story and then going back into his social media laboratory, concocting some voodoo formula and then sprinkling over the organizations social media tools in the hopes that “if you build it, they will come”.  Rather, it is, at a minimum, understanding that it is everyones responsibility to become adept at thinking about and using at varying levels.  Not everyone will spend hours heavily entrenched in Social Media activities directly.  But, everyone needs to be aware of what it takes to engage with Customers 2.0, that is, online, realtime and respectfully (you don’t always need to throw your hands up and give customers what they want but you do need to be able to address them and their concerns expressed online–a whole different blog post).  This is everyone’s job 1.  Without customers there is no reason to even attempt a Hail Mary.

This is all to conclude that Social Media takes:

We all hope our team gets to the end of the game with a chance to win.  The Hail Mary in football is the last hope that all the effort put into the game to get a team in position to win might pay off.  But, it’s a terrible strategy for your social media efforts.

Please note: I reserve the right to delete comments that are offensive or off-topic.

My Most Popular Posts